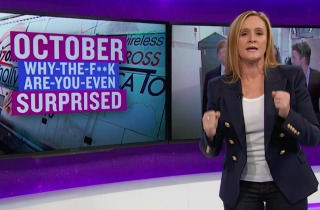 It’s been a long weekend for Donald Trump, so Samantha Bee came out swinging at his lewd comments about women during Monday night’s episode of Full Frontal.

Bee proceeded to blast Trump’s apology video as insincere and hypocritical, and she ribbed the media with a “vagina monologue” for their reluctance to say the word “pussy” on air.

Moving on, Bee put the GOP on blast by explaining how Trump supporters managed to excuse his various controversies, and only ran away from him with the emergence of the lewd audio.

While supporters have rescinded their endorsements and various Trump surrogates admitted that Trump’s comments were inappropriate and wrong, Bee called them out for saying too little too late.

Bee especially roasted House Speaker Paul Ryan for distancing himself from Trump over the past few days, but still endorsing him despite how many times he’s condemned the mogul.

“You don’t have the courage of a single one of your convictions,” said Bee. “But you were smart to disunite Trump from your Fall fest, he wouldn’t have been able to resist grabbing a pussy like you.”

Watch above, via TBS.