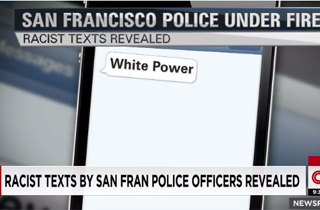 “When a police officer engages in misconduct, there are significant implications for public safety and for the public trust, particularly in our minority communities,” District Attorney Gordon Gascon said in a press conference yesterday announcing the probe. “And we must do everything that we can to restore that trust.”

The results of the investigation, meant to determine whether there was a “deeper culture of bias” in the department, could invalidate many of the 3,000 cases the officers worked on in the past decade. According to CNN, African-Americans comprise only 5% of San Francisco’s population, but nearly half of the city’s prison population. If necessary, the inquiry could expand beyond the actions of the 14 cops, already accused of saying some pretty vile things.

For instance, here are the texts of Sgt. Ian Furminger, a cop convicted of taking personal belongings from drug search subjects, and whose actions prompted the entire review. Per CNN:

In one text, according to the government’s motion, a correspondent asks Furminger if he celebrates Kwanzaa, the December holiday honoring African culture. He responds, “Yeah we burn the cross on the field! Then we celebrate Whitemas,” according to the motion.

In another text, Furminger exchanged text messages with another San Franscisco [sic]police officer about a black man married to a friend of his wife. The couple was visiting their home at the time.

“Get ur pocket gun. Keep it available in case the monkey returns to his roots,” the unnamed police officer texted Furminger, according to the government motion. “Its [sic] not against the law to put an animal down.”

Furminger also allegedly called another officer a “f-g,” called a black officer a “f—–n n—-r,” according to CNN affiliate KPIX, and made derogatory comments about Mexicans and Filipinos.

Watch the report below, from CNN: