Sanders Hits Back on Hillary’s Slams Over Abortion: She Took Me ‘Out of Context’
video

Sanders Hits Back on Hillary’s Slams Over Abortion: She Took Me ‘Out of Context’ 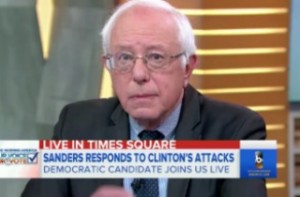 Bernie Sanders appeared on Good Morning America today, where he responded to several of the attacks Hillary Clinton launched against him throughout the week.

Speaking with David Muir, Sanders went over how the former Secretary of State has been implying that he is dismissive of abortion and the general issue of a woman’s right to her own body. Specifically, Clinton has been pointing to Sanders’ interview with MSNBC, where he said that Donald Trump‘s controversial abortion comments were a “shameful distraction” from serious issues.

“I am 100 percent pro-choice and will defend women’s right to choose,” Sanders said. “I will continue to defend a women’s right to chose and I will take on those Republican governors all over this country who are trying to restrict and take away that right.”

The Sanders and Clinton campaigns have had a rocky relationship lately. In addition to the attacks over abortion, Clinton’s camp has been refusing to debate Sanders again over the negative “tone” his campaign has taken against her. Even Clinton herself lost her temper yesterday, when she said she was “so sick” of the attacks after she was confronted by an activist asking about her accepting money from people in the fossil fuel industry.

As for Sanders, he defended the activists by saying that Clinton was covering how she “moved much closer” to him on the issues, and that she took his comments on abortion out of context.