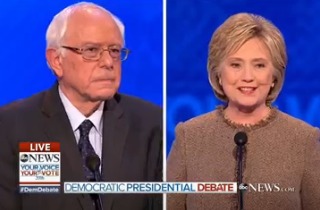 David Muir started off the questioning of the third Democratic debate by confronting Bernie Sanders over his campaign’s breach of DNC voter data on Hillary Clinton. While Sanders’ campaign has fired the staffer responsible for the breach and made a deal with the DNC for an audit, Muir asked Sanders whether his campaign overreacted in their blasting of the DNC for sanctioning them.

Sanders responded that DNC data vendors have seen data leaked through the cracks to other campaigns in the past, and said that the DNC was threatening to lock the campaign out of its data file without discussing the problems with them first. Sanders acknowledged that the breach was a problem, but expressed hope that Clinton would agree with him and call for an independent investigation to resolve the concerns of both campaigns to stop improper access of data in the future.

Muir continued the questioning by asking Sanders whether he owed Clinton an apology on the stage, to which Sanders immediately obliged.

Yes, I apologize. Not only do I apologize to Secretary Clinton, and I hope we can work together on an independent investigation from day one. I want to apologize to my supporters. this is not the type of campaign that we run, and if i find anybody else involved in this, they will also be fired.

Clinton accepted Sanders’ apology afterwards, and agreed that the best way to move forward was with an independent inquiry to ensure the data problem was officially resolved.