Sandra Fluke Agrees: Limbaugh Did Her a ‘Favor’ by Giving Her Exposure 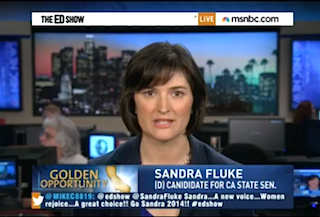 Sandra Fluke first gained national attention when Rush Limbaugh called her a “slut” on his radio show. During an appearance on MSNBC’s The Ed Show Thursday to discuss her bid for the California State Senate, Fluke agreed with Ed Schultz that Limbaugh may have actually done her a “favor” by bringing her that extra exposure.

As a Georgetown University law student in 2012, Fluke was initially barred from testifying on contraception to an all-male Congressional panel by its Republican members before ultimately testifying to Democrats on the issue. She argued her school should have to include contraception in its health care coverage despite any moral objections it may have.

Following Fluke’s testimony, Limbaugh called her a “slut” and a “prostitute” on his radio show, adding, “If we are going to pay for your contraceptives, and thus pay for you to have sex, we want something for it. We want you to post the videos online so we can all watch.” He later apologized to Fluke for his “insulting word choices.”

“I think Limbaugh did you a favor by putting you out there like that and I hope you understand where I’m going on that,” Schultz told Fluke today. “I mean exposure is very important, people now look to you in a big, big way for leadership on some very pertinent issues.”

“I agree with you that exposure is important,” Fluke said in response, “because it lets us shine a light on important issues we need to be talking about.”

On the issue of a congressional run, which had previously discussed, versus the State Senate campaign she settled on, Fluke said she just wanted to go where she think can affect the most “progressive change.”