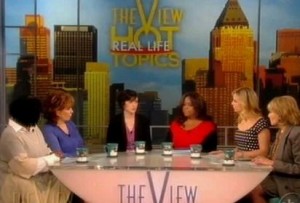 The View had newly famous Georgetown law student Sandra Fluke on the show today, after Fluke was referred to as a “slut” and a “prostitute” by Rush Limbaugh on his radio show last week. After the show began hemorrhaging sponsors, Limbaugh issued an apology to Fluke, saying that his language was meant as an attempt at humor. The panel had her on to comment on the controversy, which she characterized as “an attempt to silence me, [and] to silence the millions of women and the men who support them [in the belief that] contraception is an important helathcare need that they need to have met in an affordable and accessible way.”

Barbara Walters read Rush’s statement, and then asked Fluke if he had called her personally to apologize. She said he hadn’t yet, and that she preferred if he didn’t contact her personally. She also said that she wasn’t taking his apology very seriously, as it seemed prompted by the loss of sponsors rather than sincere regret on Rush’s part. She also called out other political commentators like Glenn Beck for using similar language, saying this controversy was “not one person who went crazy…[but at] segment of political commentators who think this is acceptable. She also urged people who were curious about the controversy to visit Media Matters, who she praised for their coverage.

Doesn’t look like this issue will be going away for Rush anytime soon! You can see the clip here, via ABC: