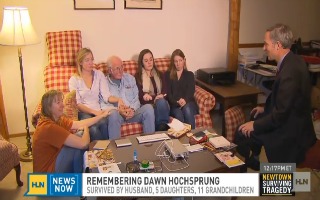 The family of Sandy Hook principal Dawn Hochsprung sat down with HLN today to discuss her heroic efforts in attempting to subdue the gunman. When asked what she’d say if she could say anything to her mom, Hochsprung’s daughter Erica replied she’d ask her mom to “come back, just come back.” Crying, Erica said her mom was her “rock.”

Hochsprung’s husband George told HLN that when they met he “just fell in love with her.” The feeling may not have been mutual just then, however, as he asked for her hand in marriage and she turned him down “five times.” The sixth time, though, she said yes and the couple had been married for ten years.

George Hochsprung spoke of his previous plan to build his wife a house in the Adirondack’s. George was much older than his wife and said he thought he would pass away first:

Two teachers who survived the tragedy told George that Dawn had sent them to safety. He told HLN his first response was to be angry with his wife, saying, “Dawn put herself in jeopardy and I have been angry about that until…I met the two women she saved.”

Dawn ran toward the gunman in an attempt to take him down. “She could have avoided that, her husband said, “but she didn’t. I knew she wouldn’t, so I’m not angry anymore.”

Watch the full clip below, via HLN: