Santorum Doubles Down: ‘You’re Not A Real Republican Until You Curse Out A NYT Reporter’ 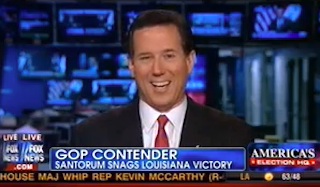 Santorum may have been alluding to the time then-Governor George W. Bush was caught on a hot mic cussing out New York Times reporter Adam Clymer. “There’s Adam Clymer, major-league asshole from the New York Times.”

“You know, they had the Romney press secretary in the back of the room spinning these guys and he’s out there parroting this and I’ve already answered the question a couple of times and he came back at me again and I’m not going to keep doing this. So, you know, my feeling is we made the point. and the point is as we have this debate before the Supreme Court today. That Governor Romney of all the people in this party, as the person who put the blueprint together for Obamacare, is uniquely disqualified to make the argument against Obamacare and it’s — in my opinion — as we’re seeing today at all the focus on Obamacare, it’s the biggest issue in this race because it affects our economy, it affects unemployment, it affects the size and scale of government. It affects our deficit. I mean, this is a big issue.”

Earlier on CBS This Morning, Zeleny stood behind his question in an interview with Charlie Rose. “He said in his speech, to a room full of supporters, that he believes Mitt Romney is the worst Republican in the country. Health care was not attached to that sentence in his sound bite there, so simply asking him for clarification. And he did, in fact, explain in full there that health care is what he was talking about.”

Watch Santorum defend his remarks to Zeleny below via Fox News: