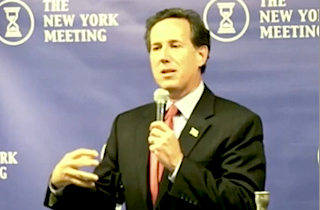 At the height of a debate in Congress over raising the minimum wage, former Republican senator and presidential candidate Rick Santorum said this week that he’s “not sure” that the GOP cares about the poor in this country as much as their Democratic counterparts do.

The comment came during a talk Santorum gave at an event sponsored by The New York Meeting, a conservative group in New York City, to promote his new book, Blue Collar Conservatives

. Answering a question about the idea of altering the earned income tax credit as an alternative to raising the minimum wage, Santorum spoke out about the “importance of work” in America, with some detours through his problems with the Affordable Care Act and the “dangerous” co-habitating relationships of single mothers.

If there is one Republican who has been particularly reluctant to talk about the poor it’s Rick Santorum, who, on multiple occasions, has resisted even acknowledging the existence of “class” in this country. During the 2012 campaign, he attempted to differentiate himself from opponent Mitt Romney by saying, “There are no classes in America.”