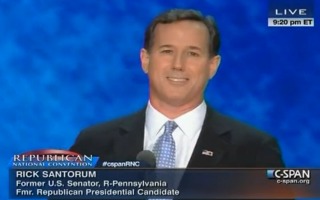 Former Pennsylvania Sen. Rick Santorum took to the stage at the Republican National Convention, after presenting the strongest competition that Mitt Romney faced in the 2012 GOP primaries, to endorse the former Massachusetts governor to be the next president. Santorum attacked the welfare state and what he called the “assault on marriage and the family.” He described the many types of “hands” across America that inspired him — both the weathered hands of workers and the hands of the infirmed.

“I am a first generation American,” Santorum began before outlining his immigrant family’s history and working-class roots.

Santorum shifted to attacking President Barack Obama, saying that under his administration nearly half of all Americans are now receiving government assistance.

“President Obama spent four years and borrowed $5 trillion trying to convince you that he can make things better for you – to put your trust in him and the government to take care of every problem,” Santorum continued. “The result: Massive debt. Anemic growth. Million more unemployed.”

He praised women in the workforce and in the home, but went on to say that “If America is to succeed, we must stop the assault on marriage and the family today.”

“President Obama rules like he is above the law,” said Santorum. “When a president can simply give a speech or write a memo and change the law to do what that law says he cannot do, we will no longer be a Republic.”

“America is still the greatest country in the world and with God’s help and great leadership, we can restore the American dream,” said Santorum.

“I shook the hand of the American dream, and it has a strong grip,” said Santorum, noting the farmers and laborers in the heartland that inspired him across the nation. “Finally, I cradled the hands – the little, broken hands – of the disabled,” Santorum continued.

Finally, he talked about his daughter Bella Santorum, who struggled with a medical condition earlier this year. He noted that she was given a dire prognosis by doctors, but he maintained hope and she eventually recovered.

“I thank God that America still has one party that reaches out their hands in love to lift up all of God’s children – born and unborn,” said Santorum to thunderous applause and a standing ovation from the RNC crowd.

Finally, Santorum endorsed Mitt Romney and Paul Ryan who he said will deliver the nation from dependency.