Santorum Laughs Off Libertarian Critics During Heated Clash with The Independents 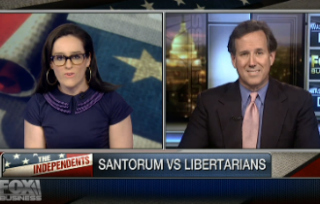 In case you missed it: Rick Santorum appeared on The Independents on Thursday evening.

The former GOP senator doesn’t like the libertarian insurgency among young voters; he’s been quite clear about it in recent months. And so if you were to guess that his time with FBN’s libertarian show was a heated, frothy mess of moralistic posturing, then you would be correct.

I won’t spend too much time dissecting the 10-minute-long debate, because you should really just watch it and enjoy. But some highlights:

Watch the full segment below, via FBN: