Santorum Says He Likes Gingrich, Then Proceeds To Trash ‘Erratic’ Behavior On This Week
video

Santorum Says He Likes Gingrich, Then Proceeds To Trash ‘Erratic’ Behavior On This Week 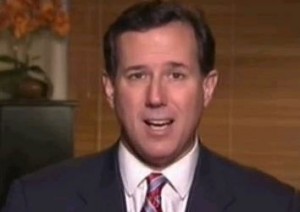 Now that Newt Gingrich has become the newest “Not Romney” to surge in the polls, Rick Santorum has a choice to make: whether to plow on ahead or drop out and have conservatives get behind Gingrich. George Stephanopoulos asked Santorum today about this decision, but Santorum insisted he would be a better conservative standard-bearer than Gingrich. He branded the Mitt Romney-Gingrich fight as a choice between a moderate and an “erratic conservative.”

RELATED: Rick Santorum Responds To Calls For Him To Quit, Tears Into Gingrich And Romney

He pointed to Gingrich’s support of issues that have also been pushed for by President Obama like climate change, the individual mandate, and immigration. He said this was a “three-person race” between him and two candidates who have not always seen eye-to-eye with the Republican party on some important political issues. He pointed to himself as someone who can rally the Republican base.

Stephanopoulos pointed to the poll results that saw Gingrich and Romney scoring highly among those who prioritized electability against Obama to be a big issue in this campaign. On the other hand, Gingrich also scored well with people who wanted a candidate who shares their conservative values. Again, Santorum falls far behind (though not as much as Romney). Santorum argued that these numbers differ on a state-by-state basis, and the race has changed so much so far and anything is possible at this point.

Then Stephanopoulos played video of Santorum at last week’s CNN debate criticizing Gingrich, and doubled down on his criticisms today, though he did add a qualifying statement.

“Newt Gingrich is a friend of mine, period. He’s a good friend of mine, I like Newt, he’s a brilliant guy who has tons of ideas. The issue is discipline. The issue is leadership. If you look at his leadership when he was in the House of Representatives, there was a conservative coup within three years of him becoming the Speaker. Eventually he was forced out because of, well, you know, issues of being able to focus, execute, discipline, order… not doing things that are out of left field. You see this repeatedly. This is not the kind of leadership we need to take on Barack Obama. We have to have a stark contrast.”

He worried that if Gingrich was the nominee, the Obama team would easily be able to launch a huge ad campaign attacking him and would make the Republican candidate the big issue of the presidential race, and the party would be “in tough shape” throughout the general election. Once again, he qualified that he likes Gingrich, but insisted he is a “high-risk candidate” with a slim chance of winning the presidency.