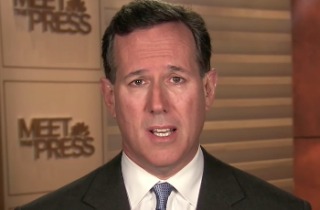 Former senator Rick Santorum is known for using his conservative social stances as a prominent feature of his campaign platforms. On Meet the Press, the 2016 Republican hopeful said that “of course” he would fight the Supreme Court if it rules to overturn state bans on same-sex marriage.

Chuck Todd asked Santorum to respond to a statement from Mike Huckabee last week, calling on states to disregard a potential ruling from Obergefell v. Hodges that would “overrule the other two branches of government.” Santorum responded that the Court was indeed equal in power to the legislative and executive branches, but made a point of how Congress and the president sometimes had to “push back” whenever the Court “gets it wrong.”

“It’s important to understand the Supreme Court does not have the final word,” Santorum said when asked about whether he would accept a ruling in favor of gay marriage. “If the court decides this case in error, I will continue to fight for this as I have for life… We’re not bound by what nine people say in perpetuity.”

Santorum also brought up his past activism against abortion in a point about the legal options Americans can take on issues they do not approve of. “Roe V. Wade was decided 30-some years ago,” he said, “and I continue to fight that because I think the court got it wrong. I think if the court decides this case in error, I will continue to fight as we have on the issue of life.”

You can watch the interview here, via NBC News: