Sarah Palin: ‘Absolutely Out Of Whack’ For Obama To Say Private Sector Is Doing Fine
video

Sarah Palin: ‘Absolutely Out Of Whack’ For Obama To Say Private Sector Is Doing Fine 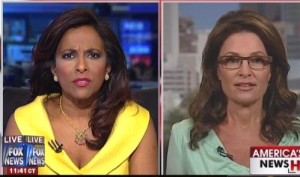 Sarah Palin is continuing to fire up conservatives ahead of the presidential election. She appeared on Fox News today to talk about the events she’s speaking at and after bashing Obama for his economic policies, she really tore into him for his gaffe on the progress of the private sector, deeming it “completely out of whack” and pointing to it as indicative of the president being “out of touch” with average Americans.

Palin contrasted conservative policies with President Obama “taking economic freedom” away from small businesses and went after him on the issue of leadership. She said that it’s no longer just “hardcore conservatives” who don’t trust Obama, it’s also independents and “good patriotic Democrats.” She argued that Obama’s economic policies are based on those of “failed socialist nations” and said many Americans are genuinely concerned about the direction of the economy.

And as for Obama’s now infamous gaffe that “the private sector is doing fine,” Palin had some choice words for the president.

‘An absolutely out of whack comment, but very indicative of his thinking about what it’s going to take even to get our economy on the right track. If he truly believes… that the private sector is doing okay in this time of economic woes, it’s indicative of he being quite out of touch with what the normal working man and woman is feeling today in America.”

She also pointed out that Obama had no private sector experience before getting into politics, and was only a “lawmaker, not an administrator” when he was involved in state government.