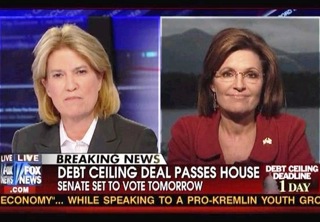 Sarah Palin was on autopilot tonight. In a strange twist of events rarely seen since 2008, Palin went on the air with On the Record host Greta Van Susteren and went through the motions– without a hitch, without a spark, without making a single unique point. After calling Vice President Joe Biden‘s classification of the Tea Party as terrorists “appalling,” she noted that it should be a surprise to no one that Tea Party Congressmen “were going to fulfill their promises.”

“It is quite appalling and certainly proves how out of touch this White House is,” Palin remarked of Vice President Biden calling Tea Partiers “terrorists.” It is difficult to fully disagree or find anything particularly offensive with that comment. She later moved to the Tea Party members of Congress themselves, noting that “growing more debt isn’t going to lower the debt” and that Tea Partiers were “taking a stand in light of those issues.” Furthermore, “it should not be a surprise to the politicos that… once [Tea Partiers] got into office, they were going to fulfill their promises.”

She then provided her analysis of the bill itself, which scratched the surface of what was in it. Contrary to every other analysis of the deal out there– but not so much so as to be a newsworthy opinion– Palin argued that “Obama did get what he wanted,” by which she referred to the fact that he would not “have to deal with this issue until after the election.” Then she turned her outrage towards Congress for not following “the pledge that our Congressmen made to America” that they would upload bills to the internet within three days of voting.

“Doggone it,” she said, mustering a little bit of that Palin swagger Americans seem to hate so much when confronted with a potential presidential bid. “That is what makes us disappointed in our politicians in Washington.” She concluded disparaging the Obama administration for talking to foreign dictators and not using domestic natural resources for energy– the topic she is by far the most knowledgeable in, perhaps one of the most knowledgeable figures on energy use in the nation.

And that was it: no extremely controversial statements, no “folksy” butchering of the English language, not even an empty threat to run for President of the United States, not to mention an analysis that touched on more than the absolutely most superficial she could get away with. That fire to run for president may be sitting pretty in her belly, but she doesn’t seem to be breathing any of it out. Whether America is feeling Palin fatigue is up for debate, but it seems clear that Palin herself– like Lady Gaga, or Glenn Beck, or anyone else who is too slavishly devoted to their causes to take a vacation once every couple of years– is tired.