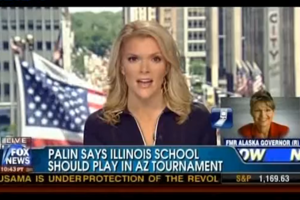 Sarah Palin really knows how to get the most bang for her buck out of her catchphrases. Palin’s Twitter account— Update: and her Facebook — already hinted at her fury about this, but today Palin took to Fox News to discuss the Illinois girl’s basketball team whose school is protesting against the new Arizona illegal immigration law, and she wants the girls to “go rogue” in response.

Palin called in to America Live to talk about the subject with host Megyn Kelly, where she explained her outrage against the school by calling their objection to the law “fightin’ words” and gave some advice to the basketball team:

“I want these girls to feel empowered and go rogue if they must, figure out a way to protest a decision like this and figure out a way to get there on their own if it can be done not being sanctioned by the school, this tournament. Look at these lady hoopsters told ‘no ball in Arizona,’ because Arizona isn’t ‘aligned with the beliefs and values’ of, I guess, their school district'”

She also criticized the school for letting students travel to China despite their notorious record on human rights, and called them hypocrites for protesting Arizona for what they perceive to be the same thing.

“You know a thing or two about politics,” Kelly offers helpfully, “and basketball!” Asked whether she has any further insights on the topic based on her history as a basketball player, Palin responds with some more wisdom for the basketball team, which actually sheds a lot of light onto Palin’s political thought processes. When they grow older, Palin says, they will find that “everything they ever needed to know, they will have learned on the basketball court.”

The America Live interview below: