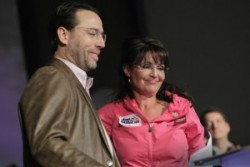 One lesson sure to be learned from this year’s midterms is that it’s important to make sure you have properly hung up your phone. Yesterday members of KTVA (Update: CBS clarifies that KTVA is not an affiliate: “KTVA News is owned by the Alaska Broadcasting Co., not CBS. No CBS staffers were involved and CBS has no knowledge of and no comment on these allegations.”) in Alaska were accidentally caught on a answering machine discussing finding negative stories about Joe Miller to cover in the final days of his campaign. A transcript and audio of the message was posted on Miller’s site.

According to the Daily Caller “assignment editor Nick McDermott texted an apology after realizing he left a voicemail: ‘Damn iPhone … I left you a long message. I thought I hung up. Sorry.'” But there’s been no further response from KTVA.

The same cannot be said for Miller supporter Sarah Palin who tweeted earlier this morning that the CBS crew were “corrupt bastards.” Twice.

Meanwhile, despite Palin’s Rahm-like support Miller has sunk so far and so fast in the polls this past week that the GOP is reportedly abandoning him in favor of write-in candidate Lisa Murkowski.