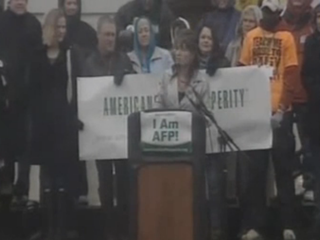 Potential presidential candidate Sarah Palin has been eclipsed lately by certain other quizzically-coiffed Republican hopefuls, but she returned to the spotlight today at a Tea Party rally in Wisconsin with more fire and brimstone than the Fox News commentator had given her followers in quite a while. While Palin had a few words for the President and his “solar shingles,” today was all about proving that she didn’t fear the GOP establishment and would accept no compromises.

“These are the frontlines in the battle for the future of our country!” Palin proclaimed, before describing herself as anything but a presidential candidate: “a patriot, as a taxpayer, as a former union member and as the wife of a union member.” She thanked the “good folks” for standing their ground and reminded them to keep the aims of community justice in sight: “real solidarity is coming together for the common good.” She defined courage to them– both in themselves and their public leaders, and even employed some Jesse Jackson-esque rhetorical flair in refudiating “the obstruction and the destruction” of the Wisconsin union “rent-a-mobs.”

She then went after the Republicans, with whom she was not-at-all pleased. “Yeah, I’ll take on the Republican establishment,” she admitted as the crowd roared. “What more can they say about us?” She went through an exhaustive explanation of how Congressional compromise works, highlighting how the number of federal funds to spend dwindled as the compromise occurred over time, thanks to “politics as usual and accounting gimmicks.” She derisively challenged Republicans to “fight like a girl” and suggested they learn how to legislate from a local hockey team. “America will win!” she shouted, followed by the mantra, “We’re here, we’re clear, get used to it!”

But not to worry, Palin left plenty for Obama, too, who she thanked for causing “the working men and women to come off their sofas” and protest. She contrasted herself subtly to President Obama, pleading for the government to be “wise and prudent” and claiming “the only future Obama is trying to win is his own reelection.” She also went for some easy “winning the future” jokes and made fun of the President’s plans to invest in “solar shingles” and “really fast trains” (someone hasn’t read Atlas Shrugged!).

But this speech wasn’t about her. It was about the crowd braving the not-too-pleasant-seeming Wisconsin weather to listen to this for a good fifteen minutes, who were duly rewarded with the titles of “patriots” and “heroes,” and were all too grateful for it.

The speech via Right Scoop below: