Sarah Palin: Choice In This Election Comes Down To ‘Free Stuff Or Freedom’
video

Sarah Palin: Choice In This Election Comes Down To ‘Free Stuff Or Freedom’ 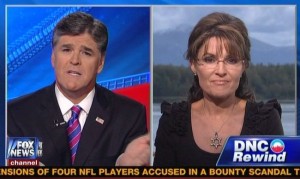 Sean Hannity brought onto his show tonight to “expose the truth” behind the Democratic National Convention this week. Palin criticized President Obama for lying in his convention speech, and scolded the Democratic party for being “disrespectful” in trying to omit God from their party platform.

RELATED: Michelle Malkin: People Realizing Obama Is Pandering To ‘Kind Of People Who Boo When You Say God’

Hannity said that before making new promises, Obama needs to be accountable for the ones he made four years ago. Palin said that in his speech, Obama sounded like enough Americans still want to get “free stuff” in order to vote him in for another four years. She boiled the election down to “free stuff or freedom.”

As for the speeches made at the DNC this week, Hannity panned all of them as “boring and stale,” as well as devoid of new ideas. He acknowledged that in 2008, something big was happening, but there didn’t seem to be the same kind of enthusiasm on the Democrats’ side this time around. Palin particularly focused on Obama’s speech, which she said was full of lies, but she also said that the entire convention seemed to give off “a lack of passion for this country.”

Hannity then turned to the controversy over the party platform and said he couldn’t believe that there were delegates on the floor who “booed God.” Palin remarked that a political platform is supposed to be a list of a party’s priorities, and so found it “disrespectful” that the Democrats were fighting to keep the mention of God out of the platform.

And as for Bill Clinton standing up for Obama four years after publicly bashing him on the campaign trail, Palin and Hannity agreed that he was just acting as a lawyer defending a “guilty client.”

Watch the video below, courtesy of Fox News;