Sarah Palin Blames the Media (Again), And Everyone Comes Out a Winner!

Sarah Palin Blames the Media (Again), And Everyone Comes Out a Winner! 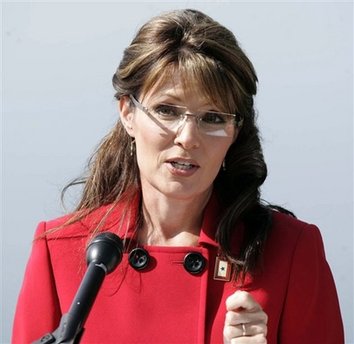 The immediate reaction to Gov. Sarah Palin‘s unexpected announcement Friday: mass confusion by the “media elites.” The timing was less a “news dump” and more a “screw you” to her mortal enemies in the fourth estate. This time, though, even the conservatives were confused: Charles Krauthammer called it “erratic;” Hot Air’s Ed Morrissey essentially wrote her political obituary.

Oh, “gotcha” media, you just don’t understand how things are done in the “real world.”

In her speech, Palin made a passing reference to the media: “I wish you’d hear more from the media of your state’s progress and how we tackle Outside interests – daily – special interests that would stymie our state.” (Note: not sure why “Outside” is in caps, but that’s how it appears in the transcript on her Web site.)

But that was just the beginning. In a July 4 letter to Alaskans that doubled as a reaction to two days worth of media coverage of her Friday announcement, Palin turned her hunting rifle on the journos. Here’s the entire editor-needing section:

The response in the main stream media has been most predictable, ironic, and as always, detached from the lives of ordinary Americans who are sick of the “politics of personal destruction”. How sad that Washington and the media will never understand; it’s about country. And though it’s honorable for countless others to leave their positions for a higher calling and without finishing a term, of course we know by now, for some reason a different standard applies for the decisions I make.

Putting aside the idea she’s quitting because of a “higher calling,” how is the mainstream media responsible for the reaction to her speech? Palin had every right to be annoyed with David Letterman, and it’s true that some in the media have taken unabashed and bizarre glee in seeing her fail. But choosing to leave office on the Friday before July 4, in a hastily thrown-together news conference (with geese loudly interrupting), left the media more confused than celebratory.

Even one of Palin’s biggest defenders in the “gotcha” media, Fox News anchor Greta Van Susteren, is miffed. In a blog post Sunday, she asks, “Does Gov Palin resigning set back women?” It’s a question, and she doesn’t draw a conclusion. But if Matt Lauer, or Charlie Gibson, or the gotcha-est of them all, Katie Couric, asked the same question, Palin’s supporters would be jumping in at even the slightest implication.

At the end of the day, the media embraces the “blame the media” storylines, because it allows them to talk about the thing they love the most — themselves. We’re curious what’s up, Gov. Palin, and nobody is interested in you going away. If you went away, who would the media have to kick around?