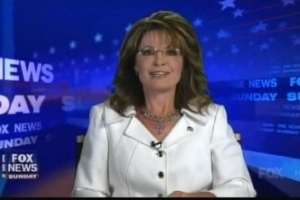 This morning Sarah Palin appeared on Fox News Sunday and Chris Wallace did not hesitate to ask her about her recent version of historical events that left many a bit perplexed. Wallace said “you realized that you messed up about Paul Revere, don’t you?” Yet Palin informed Wallace, and by extension any of her critics, that in fact they were wrong to think that Revere did not also give a warning to the British.

Before they addressed the Paul Revere controversy, Palin had a minor bone to pick with her Fox News colleague Shepard Smith regarding the purpose behind her bus tour and reiterated that “it’s not a campaign tour”:

“At least reporters don’t seem to be understanding it. Even your own Shep Smith there on Fox News, he announced the other day that I was on some publicity tour. I wanted to say, ‘Shep, take it one step further. What am I publicizing on this tour?’ I’m publicizing Americana and our foundation and how important it is that we learn about our past and our challenges and victories throughout American history.”

Regarding her earlier statement that Paul Revere “warned the British,” Palin suggested this wasn’t a misstatement that many tried to portray it as:

For any “gotcha journalists” out there, Palin wants you to know that she does know her American history, but just prefers such questions about it aren’t shouted-out at her in the future.