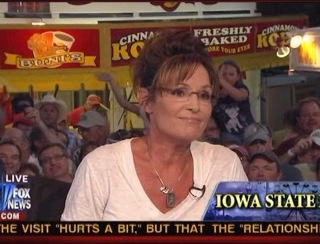 Sarah Palin‘s return to the national spotlight after a few weeks of relative quiet seem to have done some rekindling of the fire in her belly as she faced a roaring crowd last night with Sean Hannity in Iowa. After giving her breakdown of Thursday’s GOP debate and admitting she’s still not completely opposed to running for President, she came prepared with a debt plan to propose if she were ever commander in chief: “cut the crap and balance.”

Faced with the question of whether America is seeing a “meltdown of the presidency,” Palin argued that what went on in Washington was merely peripheral to the political happenings in the rest of the nation. “I think we are seeing a great awakening of the American public,” she replied, speaking more to the crowd than to Hannity. Noting this passion, Hannity asked once again whether he was correct in assessing in her that “your passion is rising– you are going around the country, I see a shift.” She replied that she did, indeed, had a “fire in the belly,” but, once again turning to the crowd, that fire wasn’t hers alone. It was a question that preceded a fiery take down of the “stupid” Congressional debt supercommittee and a plea for Congress to be more proactive.

Asked whether she had any faith in the supercommittee, Palin admitted she thought it was “stupid” and argued “you can find 10 members of any Iowa farming family” that could figure out what spending should be cut from the budget to balance it. The remark that it would be easy to solve the problem led Hannity to ask whether it was “embarrassing” for America to be in debt after “it has literally saved the world from fascism, nazism, communism, terrorism.”

“The American public told them what it would take,” she remarked about Congress, arguing that it is not America itself that should be embarrassed but the current legislators. “We said, ‘Congress, cut the budget, cap spending, and balance the budget. Now we are beyond cut, cap and balance. Now we’re telling Congress: cut the crap and balance, please!”