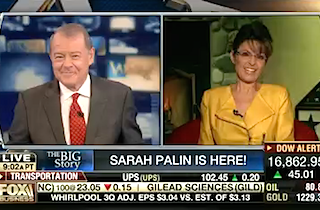 Sarah Palin stopped by Stuart Varney’s Fox Business Network show Tuesday afternoon to share her thoughts on a variety of topics, including recent comments about her family by CNN anchor Carol Costello.

“The hatred level directed against you is extraordinary and a disgrace,” Varney said at the top of his interview with Palin. “Has it driven you out of politics, driven you away from public office for good?”

“No, bless their hearts, those haters out there,” Palin replied, saying the comments only “invigorate” her to keep doing whatever it is she does. The more they are pouring on, the more I’m going to bug the crap out of them by being out there with the voice, with the message, hopefully running for office in the future too.”

“What’s it like dealing with that kind of mockery — and that’s what it is, mockery — for more than six years?” Varney asked Palin, turning specifically to Costello’s commentary. “And this is a personal question, what does it feel like?”

Rather than take the opportunity to attack Costello directly, Palin demurred, saying she knows “a lot of people have it a heck of a lot harder than the Palins do.” But, she added, liberals love to play “the politics and personal destruction.”

“They do want to destroy personally those they disagree with,” she continued. “They are very, very intolerant of those who maybe hold opposing views to their liberal, failed agenda views. So they want to crush us.”

When Varney posited to Palin that the “war on women” is really more of a “war on you,” the former governor agreed wholeheartedly, saying, “Absolutely.”