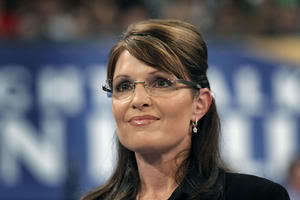 While talking to Greta van Susteren the other day, Sarah Palin announced that she was going to stop “whining about a liberal press that holds conservative women to a different standard.” She continued that theme in a Facebook post in which she was explained that she was going to instead; fight back. First up on the docket, Bill Maher who called Palin a “dumb tw*t” on his show last week.

Now, Palin didn’t respond to the Maher by name. Instead she took the high road. Or, at least, the politics and media version of the high road where you do respond but just don’t name the other person so as to prove how you’re the bigger person by “not responding” (see also: Glenn Beck on Lawrence O’Donnell):

“Upon my return from an outstanding and productive trip to India and Israel, I’ve been inundated with requests to respond to petty comments made in the media the past few days, including one little fella’s comment which decent people would find degrading. (I won’t bother responding to it though, because it was made by he who reminds me of an annoying little mosquito found zipped up in your tent; he can’t do any harm, but buzzes around annoyingly until it’s time to give him the proverbial slap.)”

See? That’s totally different than responding. That’s just spending a paragraph talking about how you’re not responding while comparing your enemy to a bug.

It’s also not whining. Palin’s post, entitled “Lamestream Media: Reload or White Flag?”, helpfully explains her new modus operandi to those who worried that she’d have nothing to say now that she was through “whining about the liberal press.”

“I was raised to believe that you don’t retreat when you’re on solid ground; so even though it often seems like I’m armed with just a few stones and a sling against a media giant, I’ll use those small resources to do what I can to set the record straight. The truth is always worth fighting for. Doing so isn’t whining or ‘playing the victim card’; it’s defending the truth in fairness to those who seek accurate information. I’ll keep attempting to correct misinformation and falsehoods about myself and my record, and I will certainly never shy from defending others who are unfairly attacked. This is in the name of justice.

I’ll keep correcting false reporting, and I’ll defend others to the hilt; but I won’t spend any more precious, limited time responding to personal, vulgar, sexist venom spewed my way.”

It’s a well-written post that’s sure to inspire her base. And the idea that Palin will stop wasting time with her attackers and instead fight for others is a good one. After all, Palin does have actual things to say about the country. Too much of the time, though, she’s talking up David Letterman’s monologue jokes. Sure, this wouldn’t be a problem if so many people in the media had such a hard on for attacking her, but it’s nice to see her promise to truly be the bigger person.

However, lets see if she sticks with it or if she keeps referring to cable TV hosts as insects. If she doesn’t, this declaration of a brand new, tougher-skinned Sarah Palin will be about as worthwhile as the White House’s promises that what we’re doing in Libya isn’t technically “war.”

Watch the original, offending Maher clip from HBO below: