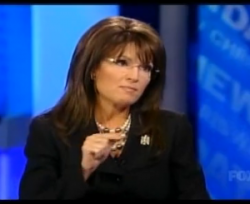 Sarah Palin was a (in person!) guest on Fox News Sunday today, something many of you are likely aware of since she devoted some of the segment to repeating her “corrupt bastards” remark that’s been making all the headlines this morning.

However in the lengthy-ish segment she also weighed in on a number of other issues including whether she thinks a GOP majority should compromise on policy (no) and what it means that two of her candidates of choice (O’Donnell, Miller) are sinking in the polls. Said Chris Wallace (after being “hurry up’d” by Palin) : “Haven’t some of your Tea Party candidates shown they are not ready for prime time?”

On her support of Christine O’Donnell: When given a choice why in the world would I have supported the Liberal, the rhino, the pro Cap ‘n Tax, wishy washy on Obamacare [Mike Castle]. If given the choice of course I am going to support the conservative in that. And who was going to guarantee that Castle was going to win anyway…it’s a blue state. So given the choice, yeah, give it the old college try and allow the conservative in the race to have the message, the voice heard, and that’s what my endorsement allowed a little bit of a boost at least to allow some people to pay attention to what she was saying.

On Joe Miller: “The thing’s this fellow has had to put with against the GOP machine and the Democrats and the Liberal media in Alaska it’s not wonder that the numbers are tightening in that race.”

Cue: “Corrupt bastards.” Interestingly when Wallace pressed Palin on whether the “local reporters in Alaska conspired with the Murkowski campaign” on the tapes Palin backed down on directly linking the two.

Palin also says that she doesn’t “need to run for office” and that she “loves the freedom that I have” and that she would weigh that freedom against the constraints she would have as a candidate. For his part Wallace (doing his best Bill O’Reilly) thinks she is making too much money and having too much fun to run.

As for Karl Rove‘s assertion the other day that Palin’s Discovery ‘reality’ show (it’s not actually a reality show) might not jibe with the gravity of the Oval Office Palin rightly (and amusingly) points out that Ronald Reagan was an actor who boasted ‘Bedtime for Bonzo’ to his credits so perhaps Rove might better direct his criticism elsewhere. Snap! Watch the full interview below.