Sarah Palin: ‘I’m Not Going To Be Asked’ To Step Up In A Brokered Convention 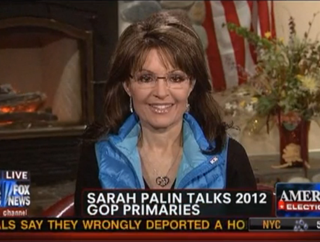 With the Alaska Republican primary on the horizon, Alaska’s most prominent Republican has been making the rounds on Fox News, and this morning Sarah Palin stopped by to tell Republicans to keep their eye on the Democratic ball, not to fear a brokered convention, and not to watch Game Change. But in doing so she made a new revelation in being asked whether she would take the convention stage should it be brokered: she doesn’t expect anyone to support her.

Giving a similar evaluation to the field in Alaska as she did last night– that Mitt Romney would probably take it, and Rep. Ron Paul would make a strong showing– anchor Uma Pemmaraju asked the question that everyone always asked Palin about the primary, just in case she changes her mind: would you throw your hat in the ring, in a brokered convention? “I’m not going to be asked!” Palin laughed, but added, “if it results in a brokered convention, that is nothing to fear.” She noted that she would support any candidate, “anybody but Obama.”

Palin also weighed in on Rick Santorum‘s attempts to woo independents and Democrats in open primaries, which she found fair. “A dirty trick is when your kids are attacked,” she argued, not “soliciting independent Americans.”

As for Game Change, Palin said she wouldn’t give it the time of day, but knows it is false because “there were people on my side who were with us 24/7” who saw and read the story and knew it was false. She ended by throwing Rep. Allen West‘s name out as a good potential vice presidential candidate.