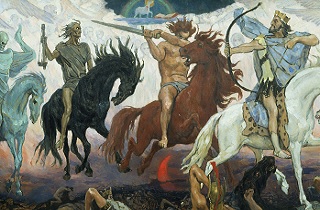 This is not some sort of bait-and-switch where the Palin-hating liberal swoops in with a zinger, this is for real: Sarah Palin is actually right about something. Furthermore, she’s not just a little bit right, she doesn’t just have a point, the former Alaska Governor is absolutely, 100% right. While you arrange your lambs in snuggly positions with your lions, let me explain. Fox News Sunday host Chris Wallace revealed, yesterday, that “top Republicans” had sent him unsolicited oppo research and questions for Sen. Ted Cruz (R-TX).

Former Governor Palin (R-AK) tweeted, on Sunday, that Wallace ought to reveal which sources had sent him the dirt on Cruz. She tweeted “@FoxNewsSunday Keep it TRULY fair & balanced. Release the GOP names encouraging you to trash @SenTedCruz. No more anonymous sources.”

Many Republicans are angry with Cruz for engineering a strategy that has the House GOP demanding a government shutdown and/or default if Obamacare is not de-funded. Presumably, the research sent to Wallace was intended to undercut Cruz, and perhaps trip him up. Palin’s tweet appears to have been motivated, in part, by affinity for Cruz, but also a well-earned contempt for anonymously-sourced news. Regardless of her motives, though, Palin is on firm journalistic footing with her demand.

Oppo research like this typically makes its way too a reporter in one of two ways: either as a general blast to journalists, with no attempt to hide the source, or as a specific package delivered to a particular reporter. Wallace’s is obviously in the latter category. Oppo deliveries like this are usually appended with language like “off the record” or “not for attribution,” or are generally understood to be off the record. They don’t need to be on the record because they typically don’t consist of new reporting, but rather, point the reporter toward existing reporting that he can verify independently.

The catch is that an unsolicited email, even if marked “off the record,” or understood to be off the record, isn’t actually off the record until the reporter agrees it is. We generally don’t burn sources in these cases because it isn’t usually newsworthy, and a source that feels burned won’t ever be a source for you again. There are rare exceptions. It was less newsworthy that Barack Obama once wore a Muslim-y outfit than it was that Hillary Clinton‘s campaign wanted people to know that.

This might be the reasoning that Wallace used in not revealing the source of the information, that even if it wasn’t technically off the record, he wished to honor the spirit of that unspoken agreement. If that’s the case, though, then he had no business revealing that the research even existed; that, in and of itself, would be a violation of off the record communication.

The reason he revealed it was that the source itself was newsworthy, that “top Republicans” were trying to undercut Ted Cruz. If the public has an interest in knowing that, then they surely have an even greater interest in knowing which top Republicans were doing it. Simply put, something can’t be a little bit off the record, any more than you can be a little bit pregnant. If Wallace concealed his source because they were off the record then he shouldn’t have mentioned it at all. If he was serving the public interest in revealing it, then he abdicated that interest by not revealing the source of the oppo research, and the contents of it. Sarah Palin is right, he should come clean.