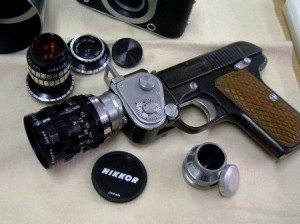 The decision not to release photos of slain terrorist Osama bin Laden has been met with both bipartisan support and bipartisan opposition, so it isn’t that remarkable that liberal commentator Alan Colmes, left-leaning comic Jon Stewart, conservative icon Sarah Palin, and I agree that the photos should be released. What is somewhat remarkable, though, is that we have each offered separate, distinct, and compelling arguments for doing so. Lots of people agreeing about something doesn’t make them right, but it makes their reasoning worth listening to.

Many liberals, myself included, probably dismissed Sarah Palin’s suggestion to “Show photo as warning to others seeking America’s destruction. No pussy-footing around, no politicking, no drama;it’s part of the mission” as so much political posturing, and initially, I also dismissed the notion that such photos could possibly act as a deterrent to people who are, by definition, willing to blow themselves up for a shot at martyrdom and heavenly reward.

Palin may, indeed, have been grandstanding, but upon further reflection, I do see some merit in the deterrence argument, at least as far as the recruitment of noobs like Umar Farouk Abdulmutallab, whose visions of virgins in the afterlife might dissolve into reality if presented with the no-frills physical consequences of the act. It’s similar to those programs that attempt to combat the glamor of alcohol abuse with a trip to the morgue.

For an existing terrorist, though, such photos would act as nothing so much as martyrdom catnip, but that’s just a twig into a bonfire. But aside from deterrence, the photos would likely demoralize more than a few members, and prospective members, of al Qaeda.

Wednesday night, Jon Stewart made the satirical point that the graphic nature of these photos pales in comparison to the steady diet of guts-cam shots that make up some of the most popular American television entertainment. He also pointed out the steady diet of gruesome news footage from US military action that the Muslim world is already exposed to.

In a similar, but more focused, vein, liberal Fox News fixture Alan Colmes points out that most of these horses have already left the barn. The photos of the raid’s aftermath, released by Reuters, feature several gruesome shots of dead al Qaeda combatants, the “propaganda” value of which would seem to rival the bin Laden photos, but with none of the demoralizing effect. Says Colmes:

Reuters has obtained gruesome photos of three men shot dead at the bin Laden compound. I am not posting them so readers of this site can make the choice to see them; they are at this link. The photo on this page depicts the wreckage of the U.S. helicopter and was taken hours after the raid.

If these pictures can be released, there is no reason not to release the bin Laden photos as well.

I also addressed the issue of the photos in an unrelated post Wednesday night. As you can see, my position on Palin’s argument has evolved somewhat, but there are reasons more important than all of these to oppose concealing the bin Laden photos:

For what it’s worth, and I hate like hell to even kind of agree with Sarah Palin on this, I think the photos should be released. Not because of any “pussy-footing” taunts or chest-thumping “deterrent” (although there is a case to be made that such a physical symbol of defeat could actually save lives by demoralizing the enemy), but because the reasons to do so outweigh, in importance, the reasons being given not to.

This is America, a free country with a free press, and whatever was gained by bin Laden’s killing was paid for by all of us. I agree that we ought not display it as a trophy, but those of us who feel the need to see it, to close the wound a little more, perhaps, or even for a flash of well-earned, wicked glee, or for reasons held too closely to convey, we ought to be free to do so. To deny us that, essentially to avoid pissing off some terrorists, is to grant the villain victory from beyond the grave.

There are perfectly defensible arguments in favor of not releasing the photos, and I respect the opinions of those who make such arguments, but I find the “propaganda value” argument hopelessly self-defeating. What sense does it make to combat “propaganda” by concealing the truth? And if the object of terrorism is to change our behavior out of fear of violence, what sense does it make to conceal these photos…out of a fear of terrorist violence?

It is true that we ought not needlessly inflame others, but the right of a free country, and a free people, to information of vital interest to them is not a needless incitement. In my view, concealing these photos is a subversion of the very freedoms that this terrorist struck at nearly ten years ago.