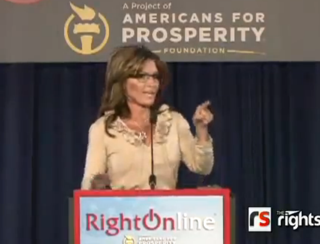 Sarah Palin has never been one to hold back in speeches, but her sense of humor was about as appropriate for the location as she delivered a speech at the Right Online conservative blogger conference in Las Vegas last night, where she made a poll/pole joke involving the augmented breasts of strippers (but also, President Obama’s approval ratings!) and attacked the media for not even reading President Obama’s book, where they would find references to cocaine and eating dogs.

RELATED: Sarah Palin: ‘Absolutely Out Of Whack’ For Obama To Say Private Sector Is Doing Fine

The speech was, at its core, an homage to online conservative commentators and journalists who propel movements like the Tea Party movement, with many references to the work of Andrew Breitbart and talk about how the old media was sinking. To give one example, Palin talked about inflated approval rating polls in a way only Palin could really get away with. “In Washington, like in Vegas, they talk about polls– there are a lot of poles in Vegas,” she joked. “The White House likes to cite polls, in recent news, because the figures involved in those polls are usually augmented, too.”

The other major highlight in the speech was Palin’s attack on President Obama’s autobiography, where she joked the media couldn’t vet President Obama because “they spent all their money in Wasilla,” but didn’t bother to read his book. “They’d have learned a whole lot,” she said, “and not just about all that pocololo [sic] smoking and that cocaine snorting and what he ate– Fido, Rufus!” She also noted that she got a “hard time” from the “cocktail circuit/circus” for eating moose, but that there was a difference: “anybody here have a pet moose?”

Palin’s full speech below (the pole/poll jokes start about 15 minutes in):