Sarah Palin: ‘No Need To Frighten’ People Over Monstrous Lie Of Social Security 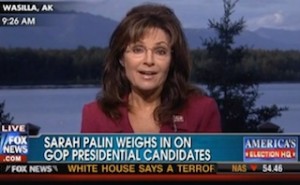 Former Alaskan Governor and current GOP political analyst for Fox News Sarah Palin appeared with Megyn Kelly to assess both the presidential address last night (SPOILER ALERT: she hated it!) and the GOP debate from Wednesday. After watching a clip of Gov. Rick Perry calling social security a “monstrous lie” and Mitt Romney’s retort, Palin showed her political dexterity by both defending the recipients of the federal entitlement program, and blaming the Obama administration for letting it flounder.

Palin opened with “no need to frighten our esteemed elders” before rephrasing her fellow Republican by saying:

“What Rick Perry was trying to say, I believe, is that there needs to be reform. Status quo is not acceptable because these programs are insolvent, and especially with fewer and fewer jobs in this country because of fewer and fewer opportunities for industry in this country you have fewer payers into the system, but you have more recipients of what the benefit is.

So he’s saying reform is necessary, and we either reform these entitlement programs ourselves, or the world capital markets will reform them for us, and that will not be a good and diplomatic and democratic way of reforming our own program.”

If that sounds somewhat familiar, it’s because another elected official made a very similar point last night, in a speech in front of a joint session of congress! (RECORD SCRATCH)

The rest of the interview was pretty much what you’d expect from the Alaskan firebrand, though Kelly did go for the “are you in or out” question, to which Palin replied “I don’t know.” Duh, duh duh.