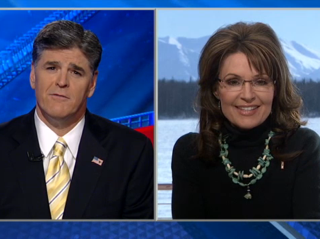 For all the noise Bill Maher has been making about not apologizing for his insult-laden jokes, Sarah Palin has remained mostly out of the fight, letting her daughter Bristol fight her own battle. Sean Hannity asked the original Mama Grizzly to weigh in on the matter last night, however, and she took the fight to the President for accepting Maher’s “dirty money” and for once having “mocked special needs children.”

RELATED: Bristol Palin Takes On Obama: Where Is My Call For Maher’s ‘Reprehensible’ Comments?

Hannity opened with a broad question of whether the attacks “take a personal toll.” Palin said that those against herself did nothing, but “when the shots are taken at, especially my youngest who has down syndrome, those I do take personally, those shots hurt.” She took some shots at those who “participate in that environment” of attack, from the President to “the ESPN sports network” (?), who have been “ruthless against unwed teenage mothers.” She also laughed at late night hosts who invite her and “still don’t get why I continue to say no.”

Palin had great words for her daughter Bristol and her sense of responsibility, and noted that her letter to the President regarding Maher and his “dirty money” was “a bit tongue-in-cheek” though still a valid point. She made clear she wasn’t interested in Maher’s false apologies. “The repentance of a hypocrite is itself hypocrisy when done for a continued allowance to do what they want,” she told Hannity, and added the President to those described as such– “our own President,” she accused, “mocking children and adults with special needs as he referred mockingly on a late night talk show to acting goofy like those in the special Olympics.”