Sarah Palin On Bristol’s DWTS Effort: ‘Haters Are Going To Hate… So We Might As Well Dance’ 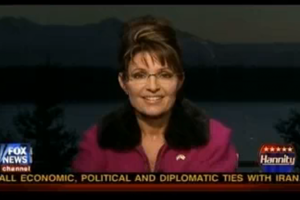 The nation may be in a tizzy over Bristol Palin‘s final appearance on Dancing with the Stars, but no one is more excited for her than proud mama grizzly Sarah . In an hour-long specially appearance with Sean Hannity tonight, the proud mother echoed Bristol’s philosophy that “haters are going to hate” and praised the teen mom-turned-dancing-abstinence-advocate for “committing to a cause that’s worth it.”

Hannity questioned the elder Palin on the recent controversy surrounding the final round of the dance competition, wherein many accused the program of being “rigged” and feared the network airing it was making a political statement in passing Bristol on to the final. Palin explained the way the voting system works– in such a way that “the American people” decide– and then let her words soar up to a mini-motivational speech that would’ve made Tony Robbins green with envy. “Haters are going to hate,” she noted, and paraphrased Bristol’s philosophy: “doesn’t matter what we do we’re going to get criticized anyway, so we might as well dance.”

But dancing was not the only activity Sarah Palin wholeheartedly endorsed as a “cause that’s worth it”– she also felt that, given the “haters” axiom, she and her family might as well “dance and fly and soar and serve and speak about issues that are important to this country.” Well, one of those things is not quite like the other, but it’s the thought (or lack thereof) that counts.