Sarah Palin Praises Media for Pushing Out Bashir: ‘Our Standards Have Got to Be Higher’
video

Sarah Palin Praises Media for Pushing Out Bashir: ‘Our Standards Have Got to Be Higher’ 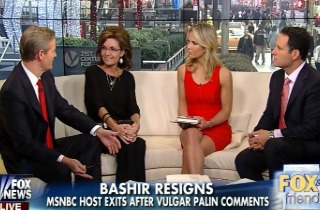 Former Alaska Gov. Sarah Palin appeared on Fox & Friends on Thursday morning to discuss MSNBC’s decision to allow former host Martin Bashir to resign after he suggested the former Republican vice presidential nominee endure slave-like torture. Palin praised the media for insisting that its standards of conduct be higher and admitted, albeit regrettably, that she is used to being targeted in such a fashion.

Palin had previously accepted Bashir’s apology for his comments and said that she hopes that this manner of discourse does not discourage others from speaking out about politics.

“In this world, you are going to be hurt and attacks will come your way,” Palin said. “I just hope attacks like that doesn’t make people hesitate.”

“One of the things about his attack is it was scripted,” Steve Doocy observed. “The people at NBC had a chance to review it and said – they obviously, or apparently, all agreed.”

“It was refreshing to see, though, that many in the media did come out and say, ‘Look, our standards have to be higher than this,” Palin observed.

Brian Kilmeade asked if the Sarah Palin of 2008 would have reacted then to this manner of attack as she did. “At this point I’m used to it,” Palin replied. “That’s kind of a sad state of affairs to have to admit that, at this point, I am used to it.”

“Six years ago, I probably would have been personally hurt by such an attack,” she revealed.

Asked if anyone representative from a women’s advocacy group had reached out to her, Palin noted that she never “heard from one feminist.”

“I’m sure they’re getting to it,” Elisabeth Hasselbeck suggested sarcastically.

Palin concluded by disclosing that she feels “callused” and is no longer surprised by these types of attacks on her character.