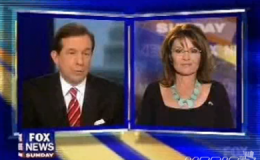 Ever since Rand Paul‘s primary victory on Tuesday a lot of folks have been drawing comparisons between the Kentucky Libertarian and former Alaskan governor Sarah Palin…including, it would seem, Sarah Palin. Palin told Fox News Sunday host Chris Wallace this morning that Paul is learning the same hard lessons about the “gotcha” media that she did when she burst into the media spotlight in August of 2008.

“One thing that we can learn in this lesson that I have learned and Rand Paul is learning now is don’t assume that you can engage in a hypothetical discussion about constitutional impacts with a reporter or a media personality who has an agenda, who may be prejudiced before they even get into the interview in regards to what your answer may be — and then the opportunity that they seize to get you.”

Leaving aside that fact that Palin has engaged is precious few discussions about anything — let alone “constitutional impacts” — are we to draw the conclusion that Palin’s advice to Paul is that he should stop engaging with any reporters outside of Fox News and merely communicate with the public on political matters via a one-way Facebook page? Sadly, I’m not sure that isn’t exactly what he is going to do, especially if Palin’s success is any measure to go by.

Meanwhile, when called on to clarify whether she thinks Rand Paul is right or wrong about his views on the Civil Rights Act she had this to say…parse this “constitutional impacts” discussion as you see fit.

Other tidbits: She is still a supporter of oil extraction (maybe on land), and she may run for president: “If the voters of America are in the mood for a kind of unconventional, candid, honest public servant — it doesn’t necessarily have to be me — but if that’s what they’re in the mood for, they’re going to let that be known, and they’re going to help really propel and push that candidate forward, and then that candidate, of course, will make the decision whether to run or not.” Video below.