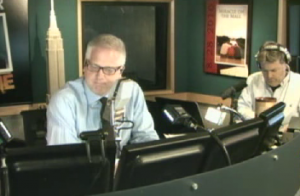 Sarah Palin is facing some intense pressure following the tragedy in Arizona. To a lesser extent, so is Glenn Beck and so, over the weekend, he sent her an email to see how she was doing as well as urge her to seek protection for her family. On his radio show today, he read from this email as well as from Palin’s response.

Beck’s email (which we heard much more of) was quite dramatic. He told her he knew she must be feeling the “same heat” he was and suggested she contact the security firm he uses because “an attempt on [Palin] could bring the Republic down.” He then said this:

“There are nutjobs on all sides. … Terror is terror. I don’t care if it’s for Allah or your party. You are not a freedom fighter. You’re a killer.”

What he read from Palin was short enough to be open to all kinds of interpretation but, given how little she’s said so far, still worth looking at:

“I hate violence. I hate war. Our children will not have peace if politicos just capitalize on this to succeed in portraying anyone as inciting terror and violence.”

At this point, one has a hard time not feeling a little bad for Sarah Palin. And it is this sympathy that Beck is clearly playing upon (a much more successful defense of the former Governor than some others). She definitely didn’t deserve all of the negative attention she received and the connections that were made between her and the killer. However, while the story may have spun too far in one direction directly following the shooting, we can’t let anyone attempt to spin it too far the opposite way.

No matter the influences, it’s important to remember that the perpetrator of this heinous act was Jared Loughner. Also important is not letting anyone forget that the victims were some poor, innocent souls in Arizona and certainly not Glenn Beck or Sarah Palin.

Listen to the audio from the Glenn Beck Program below: