Sarah Palin Asks 'Are We Just A Bunch Of Numskulls?'
video

Sarah Palin Rips Michelle Obama: ‘Are We Just A Bunch Of Numbskulls?’ 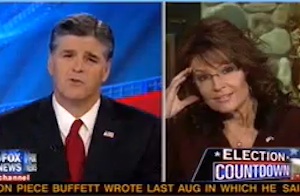 Appearing on Fox News’ Hannity, Sarah Palin reacted in disgust to a clip from Gayle King‘s interview with First Lady Michelle Obama, where she said Americans were “confused” about how much had been accomplished by the President. “Oh, Lord. Oh, Lord — what are we just a bunch of numbskulls out here in the heartland of America?” Palin exclaimed incredulously. “Just a bunch of numbskulls who can’t read the unemployment numbers and see that 5 trillion dollars in new debt later under her husband, President Obama? 5 trillion dollars more! And we have fewer jobs today than we had before we took over, but, no, we’re numbskulls out here and we don’t know what the numbers actually represent!”

“We’re not that bright!” added Hannity, who later asked if the former Alaska Governor was worried Republicans wouldn’t be able to come together to defeat President Obama.

“You know why people are so concerned, two to one, about a second term for President Obama?” Palin questioned. “We understand with now — 15, 16 trillion dollars in debt, there’s not enough money in the world to pay back what it is that we have borrowed for today’s wants and needs and yet we’re going to try to hand this bill to our kids and grandkids. That makes us less safe and secure as a nation and when you see the turmoil going around this world and now, more than ever, America needs that strong military, we shouldn’t be looking first at cutting military funding. We should be looking at the entitlement programs that need reform and looking at frivolous expenditures our bureaucracies are still engaged in.”