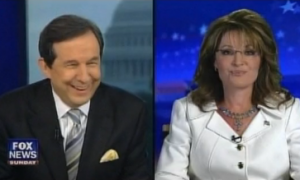 In addition to sharing her take on the story of Paul Revere and impressing Chris Wallace with her seriousness, Sarah Palin also made some news in her interview this morning by acknowledging that she may have stole some of presidential nominee Mitt Romney’s spotlight while she was in New Hampshire. Palin tried to make it clear that although she likes stepping on some people’s toes, Romney was actually not her intended target.

Wallace wondered if Palin had a theory why the New Hampshire Union Leader newspaper made a story about her their headline (along with the rest of the media), while Romney didn’t get as much attention. Palin responded:

“I think there’s a curiosity factor there still that’s in play. I don’t know. But I apologize if I stepped on any of that PR that Mitt Romney needed or wanted that day. I do sincerely apologize. We didn’t mean to step on anybody’s toes.”

Wallace laughed since many people think she actually did enjoy crowding him out of the spotlight. However, she insisted instead of Romney, she only wants to step on the toes of “people who keep screwing up.” Later in the day, on Fox News Channel, anchor Greg Jarrett showed a bit of skepticism with Palin’s response here, doubting that Palin didn’t know exactly what she was doing when she chose to arrive in New Hampshire on that date. Jarrett joked, “I’m sure it was an accident, I think perhaps her driver just hit the wrong Mapquest button.”

Watch both clips of Palin and Jarrett from Fox below: