Sarah Palin Sticks Up For Ron Paul: Media Treatment Has Been ‘Unfortunate’ And ‘Unfair’ 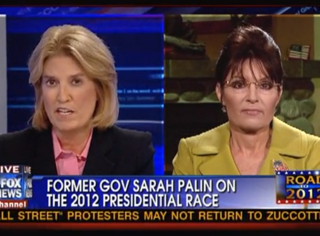 In the past several weeks, Sarah Palin has mostly kept quiet about the Republican race, particularly since bowing out of a potential 2012 run herself. Tonight on On the Record, Palin gave her assessments of the various campaigns without endorsing any individual candidate (“the cream of the crop has not yet risen”) and had some particularly strong words for the media regarding their treatment of Rep. Ron Paul: it is “unfair,” she argued, to deprive him of media coverage.

Asked by host Greta Van Susteren to evaluate and advise his campaign, Palin noted that the strongest element of the Paul campaign was his “very energized supporters,” and noted that “he’s got that going for him, this base,” but that he had an uphill battle with media coverage. “It’s unfortunate that he has been written off by the media,” she argued, adding that Rick Santorum and Rep. Michele Bachmann, “who have much to offer,” were facing the same problem.

As for actual campaign advice, Palin argued that Paul’s path to victory was “to keep preaching to Americans, keep educating us on our economic woes.” With that in mind, she noted it was difficult given the lack of exposure. ‘It isn’t fair– he being written off… he was given 89 seconds [at the last debate]… that’s unfair.” She noted, however, that it could not be Paul himself to complain about the unfairness: “he can’t whine about it.”

Palin concluded that Paul, along with Rep. Michele Bachmann and Newt Gingrich, also had the added challenge of having come from the House of Representatives, campaigning against a “disdain for that culture that is within the Congress… of corruption, of status, of pay-to-play,” but did not write them off.