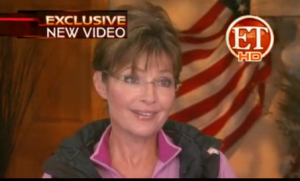 While President Obama wastes his time on silly comedy shows, Sarah Palin isn’t afraid to make appearances on real, hard-hitting news programs—namely, Entertainment Tonight. While there, she gave another hint about her possible presidential aspirations.

Last night, after escorting host Mary Hart around her Wasilla home (a beautiful estate Palin calls “just the nicest, homiest shelter for our family all these years!”), Palin sat down for an interview with the long-running tabloid show. Naturally, the talk quickly turned to Palin’s presidential intentions. Here’s what the former governor had to say after Hart asked whether she plans to run in 2012:

“You know, I have not decided what I’m going to do in 2012. I don’t think any of the potential candidates have. I think, still, it is too early for anybody to get out there declaring what their intentions are. For me, Mary, it’s going to entail a discussion with my family, a real close look at the lay of the land, and to consider whether there are those with that common sense, conservative, pro-Constitution passion—whether there are any candidates out there who can do the job, and I’ll get to be their biggest supporter and biggest helpmate if they will have me.

“Or whether there’s nobody willing to do it, to make the tough choices and not care about what the critics are going to say about you … If there’s nobody else to do it, then of course I would believe that we should do this.”

So there you have it: another resounding “maybe.” Hart followed Palin’s meandering answer by showing her the cover of last week’s New York Magazine, which advertises a story about how “Sarah Barracuda” could get elected in 2012. “How could it happen, and who you could blame,” Palin reads. “That’s about right!” Video is below. [h/t Entertainment Tonight]