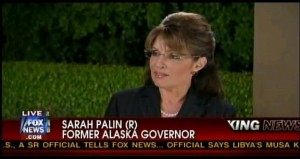 Sarah Palin, fresh off her trip to India and Israel, sat down with Fox News’ Greta van Susteren to discuss the U.S.’s military involvement in Libya. As it turns out, she has some pointers for our President.

For one, Palin believes Obama could be more clear about “the different messages” being given regarding the U.S.’s mission and ultimate goals in using military force in Libya. (She later called him “confused,” hence his “confusing messages.”) When asked what our mission should be, exactly, the former Governor shared that Muammar al-Gaddafi should be held accountable for the 1988 Lockerbie bombing, given he has, as she put it, “the blood of innocent Americans” on his hands.

Furthermore, Palin would like to see America be “in it to win it,” then exit Libya as soon as Gaddafi is removed from power, allowing Libyans to rebuild their government on their own. She also takes issue with what she refers to as America’s decision to engage in a “war by committee,” saying that other nations look to U.S. as a leader. “If we’re in the back of the bus,” she continued, are we expected to “pay the bill” for this military engagement?

…it’s not American’s role to be out and about nation building and telling other countries how to live. That’s why we have to be so careful in choosing our war. That’s why we need to know – What is the mission here in Libya? We need to know before we send our troops in harm’s way that we’re in it to win it, we’re serious, that we’re going to strike hard, and then we pull out.

“Real leadership,” she notes, “is a President who will seek to be informed and will seek to inform the American public.” A cohesive, consistent message about our foreign policy, then, is what Palin feels is most lacking where Libya is concerned.