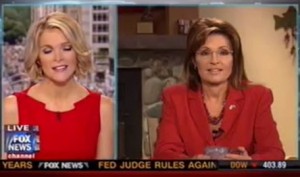 Former Alaska Gov. Sarah Palin jumped to the defense of current GOP frontrunner Gov. Rick Perry (R-TX) over President Obama‘s over-the-top “treason” rhetoric…wait, no, that wasn’t it. In an appearance on Fox’s America Live, Palin said of the President’s reaction to Perry attacks that Obama should “quit picking on other people like Rick Perry, who is just going to continue to call it like he sees it.”

This is obviously the wrong place to play the victim card, but when you’re the tough-guy Texan candidate, is there ever a right one?

Just before Palin told the President to “quit picking on Perry,” of course, she told Megyn Kelly that it was “evidence of our president’s arrogance unfortunately, to tell a presidential candidate what to say, what not to say.”

This is the same Sarah Palin, by the way, who once famously accused the President of wanting to kill her baby.

A publicist for The Kettle declined to comment on Palin’s assertion.

The fact is, President Obama probably gave Perry the best advice he’s going to get this week, as Perry’s shooting from the lip has even drawn sharp criticism from some high-octane conservatives, Palin notwithstanding. As a political reporter, and as a voter, I’m actually inclined to agree with Palin that people like Perry should not be more careful about what they say. These unvarnished declarations are far more revelatory than flack-approved boilerplate, and they make for great copy.

Where I disagree with Palin is that President Obama shouldn’t hit back (although she’s actually saying that Obama was the aggressor). I mean, what Democrat wouldn’t rather have seen President Obama respond by saying, “Well, if he doesn’t like it, can’t he always just secede?”

The conventional wisdom is that this kind of aggression turns independent voters off, but even if that’s true, who cares? That’s like saying that hockey fights turn off the knitting club that shows up to a game once a year. Get a helmet, or stay on the couch.