Sarah Palin: ‘The GOP Had Better Not Marginalize Ron Paul And His Supporters’ After Iowa 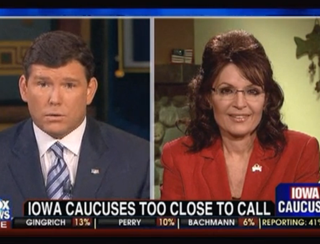 As the numbers rolled in from the Iowa Caucuses on Wednesday night, and things stayed up in the air until well past bedtime, one thing became certain by about midnight– Rep. Ron Paul would come in at a solid third place. And as Sarah Palin was asked to assess the incredible rise in support for Rick Santorum over the past week, she gave her party a warning about a different candidate: “The GOP had better not marginalize Ron Paul.”

RELATED: Sarah Palin To Donald Trump Critics: ‘Shut Up About It’

Anchor Bret Baier began his discussion with Palin by asking if she would be willing to endorse Rick Santorum Tuesday night, given her praise of him in the past. She would not do so exclusively, though she said that she was, “not surprised at his success tonight,” because he, “is spot on with his policies on peace through strength in America and taking a hard line against Iran.” She added that she believed there were “strong, good showings” for other candidates too, for “very distinct reasons,” and then turned to Mitt Romney and Ron Paul. Of the latter, Palin noted that he and his voters, “understand that many Americans are war-weary, and we are broke.”

Baier then once again attempted to get an answer from Palin about a potential endorsement, but Palin answered that she had, “openly supported each one of the Republican candidates,” and focused on getting someone elected, not just nominated. She also refused to give a prediction as to whether Romney was poised to take the whole thing, instead answering that “there is no telling after this result,” and that she believed Rep. Michele Bachmann should only drop out if she does not want to borrow or use personal money after this race.