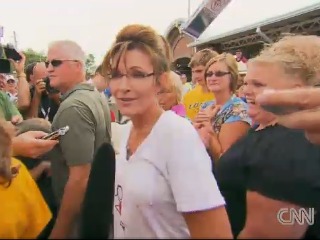 Sarah Palin, in an interview that was not conducted by Fox News, spoke with CNN’s Don Lemon while visiting the Iowa State Fair. Palin told Lemon that it isn’t her intention to “steal the spotlight” from her fellow Republicans while in Iowa but, you know. The spotlight kind of totally loves her! The resulting interview turned out well, and both Palin (who has been out of the spotlight as of late) and Lemon (whose star is on the rise) came across as engaging, charismatic and respectful (kudos to Palin for maintaining eye contact with Lemon and giving him thoughtful responses even as her handlers tried to whisk her away and throngs of fans asked for autographs). But enough fawning. Let’s get to Sarah’s comments.

For one, she enjoyed that “the gloves came off” during last night’s debates because it was “good for the electorate.” Lemon then asked her, point blank, whether she thought she was stealing the spotlight away from the official GOP candidates:

I don’t think I’m stealing any spotlight. In fact, if anybody thinks I’m stealing the spotlight, go! Go! Go find the other folks and say hello. Very thankful to have been invited to the State Fair and to get to, with my family, highlight this all-American venue and this is part of our One Nation Tour road trip and we’ll get to do some historical events. And I consider the Iowa State Fair quite historic.

Lemon then asked Palin what she thought of the pervading comparisons between her and another Republican woman consistently in the spotlight: Michele Bachmann.

Yeah, that’s so passé, to pit… just because there may happen to be two women in the race that they would, you know, as Michele had put it once, “get in the mud and engage in some cat fighting.” That’s ridiculous. It’s kind of even a sexist notion to consider that the two women would be kind of duking it out. No. If I’m going to duke it out, I’m going to duke it out with a guy.

Speaking of Bachmann, what does Palin think of that Newsweek cover? Well, she doesn’t think that anyone (“Ask the people around here!”) would consider Bachmann to be, as the cover headline labeled her, “The Queen of Rage.” In fact, she actually found that line to be more of a problem than the picture chosen.

Later, she told Lemon that the “last group or entity to be blamed” for the credit rating downgrade should be the Tea Party and that, in fact, the President is responsible for the downgrade since he’s at the top. That assessment, while not unpopular, is at odds with comments an S&P director made to Politico in an article published yesterday:

A Standard & Poor’s director said for the first time Thursday that one reason the United States lost its triple-A credit rating was that several lawmakers expressed skepticism about the serious consequences of a credit default – a position put forth by some Republicans.

Without specifically mentioning Republicans, S&P senior director Joydeep Mukherji said the stability and effectiveness of American political institutions were undermined by the fact that “people in the political arena were even talking about a potential default,” Mukherji said.

“That a country even has such voices, albeit a minority, is something notable,” he added. “This kind of rhetoric is not common amongst AAA sovereigns.”

So that particular S&P director would disagree, we think, with Palin’s assertion that the Tea Party would be the last to blame and would instead point to the inflexibility of legislators willing to let the U.S. default as a factor in the downgrade.

In any case, have a look at the interview, via CNN, and let us know if you enjoyed it as much as we did: