Sarah Palin To Donald Trump Critics: ‘Shut Up About It’ 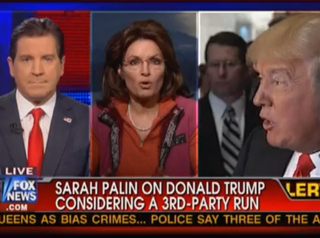 Sarah Palin isn’t one to dally around after the holidays for much time, making her first Fox News appearance of the year– a nineteen minute doozy– on Your World two days into 2012 with host Eric Bolling, and ran the gamut of topics from every 2012 candidate to the potential of third-party candidates. She was particularly vocal in defending Donald Trump, who she insisted had a lot to offer and told his detractors “enough is enough, shut up about it.”

Wearing a rather eye-catching fleece, pearl, and American flag ensemble, Palin gave her assessment of the 2012 field, insisted that the Republican field was set and she was not interested in a run, and then turned to other potential candidates. Bolling asked the former Vice Presidential candidate whether she believed there was room for Trump later in the race. Palin reacted with outrage towards those that mock the Apprentice host.

“I’m getting pretty sick and tired of people condemning and cutting down Donald Trump,” she told Bolling, “for calling it like he sees it and exercising his right as an American to express his views.” She added that she personally couldn’t consider a third party run because “I believe, personally, that a third party candidacy will allow some greater assurance that Barack Obama would be reelected and that’s the last thing on Earth I want to see happened,” but that she defended Trump’s right to consider it.

Palin also went after Republican candidates who refused to participate in a debate moderated by Trump, saying “a lot of them turned on them unfairly, unnecessarily I think.” She didn’t maintain that the criticism was exclusively for the candidates, but for anyone going off on Trump: “enough is enough shut up about it, don’t vote for him if he’s a third party candidate.”

When Bolling turned to another potential third party candidate, Rep. Ron Paul, Palin agreed that he had “the right to decide to perhaps mount a third party candidacy,” but again saw the scenario was one in which “the power of the incumbency [is] strengthened.”