Sarah Palin To Eric Bolling: ‘I’m Game’ To Run For Office, ‘All Bets Are Off’ In A Brokered Convention 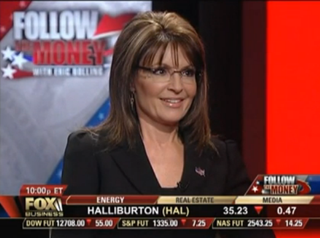 Sarah Palin was the first guest on the first episode of Follow the Money, so it seemed natural for Eric Bolling to bring Palin back for his final show. In an extensive interview that began with Bolling asking Palin to explain how her life has changed since becoming Sen. John McCain‘s running mate and culminated with Palin noting that “all bets are off” as to who can be nominated in a brokered convention– something she considers a real possibility.

RELATED: Sarah Palin Surprises The Folks At The Five, Greg Gutfeld Quizzes Her About Red Eye

Palin retold the story of how she ended up becoming Sen. McCain’s vice presidential nominee, making the somewhat profound statement that once she got on the airplane to Arizona, she “essentially never came home again.” She did say that “I’m still there, I’m still an Alaskan,” and maintained her good spirits by refusing to dread things. With the enthusiasm that Palin received after her speech at the Conservative Political Action Conference, Bolling could not help but ask what Palin was thinking of doing with her future. She answered that she was reading to help America any way she could, and if it meant “running for office at some point in the future, I’m game.” “Want to elaborate on that?” Bolling asked, getting a flat “No!”