Sarah Palin To Hannity: Obama ‘Seems To Want To Go Back’ To Pre-Civil War Days
Video

Sarah Palin To Hannity: Obama ‘Seems To Want To Go Back’ To Pre-Civil War Days 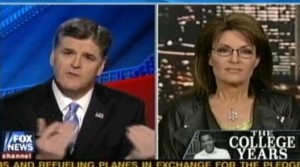 Obama — who, as a recently-circulated video that you’ve probably yet to hear about shows, once introduced and embraced the professor at a Harvard diversity rally while a student at the school — surrounded himself with radicals, Palin said. Radicals who would have us go back to a pre-Civil War mentality:

He is bringing us back, Sean, to days that… You can hearken back to days before the Civil War, when, unfortunately, unfortunately too many Americans mistakenly believed that not all men were created equal. And it was the Civil War that began the codification of the truth that here in America, yes, we are equal and we all have equal opportunities, not based on the color of your skin. You have equal opportunity to work hard and to succeed and to embrace the opportunities, God-given opportunities, to develop resources and work extremely hard and, as I say, to succeed.

Now, it has taken all these years for many Americans to understand that that gravity, that mistake that took place before the Civil War and why the Civil War had to really start changing America. What Barack Obama seems to want to do is go back to before those days when we were in different classes based on income, based on color of skin.

Have a look, from Fox News: