Sarah Palin Urges Rep. Akin To Step Aside: ‘Take One For The Team’
video

Sarah Palin Urges Rep. Akin To Step Aside: ‘Take One For The Team’ 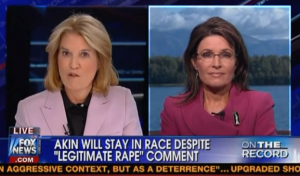 On Tuesday night, Sarah Palin paid a visit to Greta Van Susteren‘s show to discuss none other than Rep. Todd Akin. As many prominent Republicans have, Palin said she should’ve dropped out of the race — but also noted that her candidate of choice to go up against Sen. Claire McCaskill was the better choice.

“I won’t gloat about it, but I was right,” Palin said of her support of Sarah Steelman. In the primary race, Palin endorsed Steelman, and during her appearance Tuesday night, still showed staunch support for the politician.

And Akin? “You gotta know when to hold ’em and know when to fold ’em,” Palin said, underlining the need for Republicans to take back the Senate. And to do so, she said, “Missouri is a must-win state.”

Making her stance clear, Palin said Akin should have exited the race — but now that the deadline’s passed, “we have to figure out what’s next.” As a possibility, she tossed out the idea of a third-party run for Steelman.

The important thing, she said, is that they not pass up the opportunity in Missouri. “It’s doable, it’s winnable,” Palin added.

Clearly frustrated by the how the situation has played out, Palin urged Akin to “take one for the team.” Again bringing up the prospect of a third-party candidate, she said, “We are going to do everything we can to not quash this opportunity that we have to take Missouri for the good of the country.”