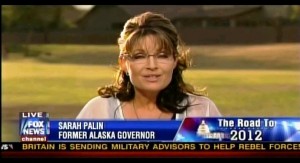 Former governor Sarah Palin made an appearance on Sean Hannity‘s show this evening to discuss, what else?, Donald Trump. Palin said that she respects Trump and his “candidness.” As for his preoccupation with Barack Obama’s birth certificate, Palin believes he’s simply answering reporters’ questions about his views regarding Obama’s birth and that the media is simply twisting things to make it look like it’s the only thing with which Trump is concerned.

Hannity moved on to Palin’s speech this past weekend, which he called one of the most “hard hitting” of her talks, particularly for the strong words it had for Palin’s fellow Republicans. Responded Palin:

And I say with all due respect to those Republicans who… they got elected with that promise that they would rein in government growth and the overreach and the overborrowing and overspending that President Obama has so embraced. We could just… We can’t afford to have any of the GOP in there or the old Blue Dog Democrats, the Reagan Democrats, be a part of Obama’s very radical agenda which, as I say, is putting us on the road to bankruptcy. We are flat broke. It makes absolutely no sense to capitulate and say, “Ok! We’ll throw in cowboy poetry and pretty monuments and more museums and maybe some road projects the we don’t need, certainly some services provided by the Fed that maybe states could be providing instead of the Fed.” So many things are thrown into this budget and yet we feel we need to, what?, strike a deal with the losing party?…

She feels that Republicans need to acknowledge that “this year’s budget is more than last year’s budget” and remember that the 2010 election was a “mandate” led by the Tea Party movement. Furthermore, she says, the GOP cannot afford to give Liberals another “tool to incur more debt” by raising the debt ceiling.

Check out the whole segment for yourselves, via Fox News: