Sarah Palin: White House ‘So Lacking Of Class And Decency’ With Common’s Invite 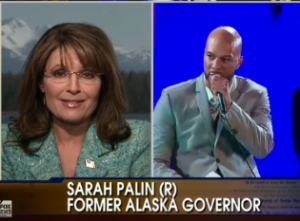 Sarah Palin stopped by On the Record last night to discuss presidential politics, her thoughts on whether President Obama is now too strong of a candidate after successfully ordering the killing of Osama bin Laden and also to reveal her disapproval of the White House invitation for the rapper/poet Common. Citing Common’s controversial lyrics about cop killing, Palin resurrected one of her past lines, “come on, Barack Obama, who are you palling around with now?”

Palin said the White House’s judgment to invite Common is “just so lacking of class and decency and all that’s good about America.” And just to clarify her position, she made clear that she’s not anti-rap, just anti-Common, as she suggested that like Bret Baier, she too knows the lyrics to Rapper’s Delight.

Shifting gears to the presidential race of 2012, she disagreed the current field of likely Republican candidates is weak and teased “it’s too early to throw my hat in the ring.” And although she does give Obama credit for guiding the operation to kill Bin Laden, she doesn’t think it puts him “in the catbird’s seat in terms of a shoo-in to win the presidency.” Instead, she declares the important issue of the economy is where Obama remains weak:

“Barack Obama has no clue how to allow the private sector to grow and thrive because Barack Obama, coming from such a leftist, almost socialist type of thinking, his idea of economic growth all has to do with government growth.”

That sure sounds like talk from someone who might want to run for President, but until she makes the decision, she has time to rehearse those lyrics to Rapper’s Delight.