Sarah Palin: Why Are The Muslims Choosing A Location ‘Just A Block Or Two Away From 9/11’
video

Sarah Palin: Why Are The Muslims Choosing A Location ‘Just A Block Or Two Away From 9/11’ 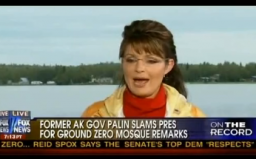 Greta Van Susteren traveled all the way to Alaska to do a live show last night (she’ll do another one tonight and Wed.) with Sarah Palin. I imagine you will not be surprised to hear they discussed the proposed mosque in Lower Manhattan and President Obama’s remarks regarding it over the weekend.

Says Palin: “It’s sounds cliche to say that He just doesn’t get it. This is an insensitive move on the part of those Muslims who want to build that mosque in this location. It feels like a stab in the heart of collectively American who still have that lingering pain from 9/11.”

Nobody argues that freedom of religion the Muslims have to build that mosque somewhere however there are a 100 mosques already in New York to chose and be so adamant about this exact location just a block or two away from 9/11 is just that knife it feels like.

“Just a block or two away from 9/11.” Palin has been getting less subtle (if that’s possible) about connecting the proposed lower Manhattan building with 9/11; over the weekend she twittered out “Will Obama discourage 9/11 mosque while he celebrates Islamic holy mth?” As though the Cordoba House is being built as some sort of monument to celebrate 9/11, which, when you cut through some of the language, is exactly what she (and others) are really saying. You can watch the segment below.

In a related note, I began to wonder yesterday who exactly coined the term Ground Zero Mosque since I don’t recall hearing it much before Sarah Palin refudiated it. Turns out it made its first appearance on Fox News back in Dec. 2009, but didn’t pop up again until the New York Post picked it up this past May. Needless to say it didn’t go wide (i.e. into the GOP midterm meme) until Palin began twittering about it in July.